In Cosmic void, there are 5 weapon types; 4 ranged, and one melee. We have the pistols, the automatic rifle, the sniper rifle, the shotgun, and the sword. I wanted to have a small variety of weapons, so that players could play the way they want. Now, the problem is: each weapon has to be viable. If one weapon is clearly superior to everything else, there is little reason to not use it. Hence, game balancing.

The way I decided to approach this was by giving all weapons a similar DPS on average, then tweak it with risk vs. reward.

For example, the pistols have a base damage of 1, and a rate of fire (or RoF) of 1/s. This makes for 1 damage per second (DPS).
The sniper rifle has a base damage of 2, but a RoF of 0.5. Thus, the average DPS is 1 as well. However, at the first shot, the sniper rifle does double the damage, which can potentially one-shot smaller critters. That is a higher reward, at the cost of lesser mobility since shooting the rifle pauses the movement.

On the graph below, I have plotted the DPS over time of all base weapons. 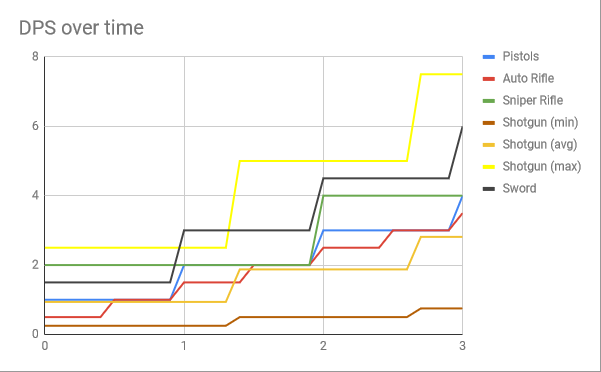 As you can see,some weapons have an immediate benefit, while others can just barely keep up. The automatic rifle has a very progressive curve; on average, it will have the same DPS as the sniper rifle, but since it allows far greater mobility while firing, and also allows for quick spraying between dodging, it still has its uses.

Let's go over each weapon, to better understand the reasoning.

The pistols are the baseline. Damage of 1, rate of 1, average of 1. This is basically what everything is measured against.

This rifle is faster than the pistols, but has weaker projectiles. On a sustained fire, they have the same DPS. However, it's a more  progressive curve. I wanted those two weapons to be fairly equal all in all, and rather leave the choice up to the player's preferences.

We are now entering the more gimmicky section. My rationale for this weapon is that I wanted a weapon that is safe to use under certain conditions, but very risky at close quarters, while maintaining a fairly high reward.

The sniper rifle has a very high base damage output (twice the pistols'), and allows the player to shoot from much farther. However, shooting this rifle stops all movement, which can put the player in a very dangerous situation, like being unable to dodge an attack, or missing a jump.

At a safe distance, this weapon has a fairly low-risk/high-reward ratio, but the risk increases exponentially as the distance is reduced. Against bosses, using this weapon would be highly risky, but could allow very strong pot-shots between dodges.

The shotgun is a special case. I wanted something that would be extremely rewarding at point-blank, hence a high-risk, but not too useless at max range either.

In the end, I've set it this way: a single shot fires 5 projectiles that each do linear damage based on the distance. So a single projectile can have a base damage between 0.25 and 0.5. That means that the damage output per shot can vary between 0.25 and 2.5, which gives us this graph: 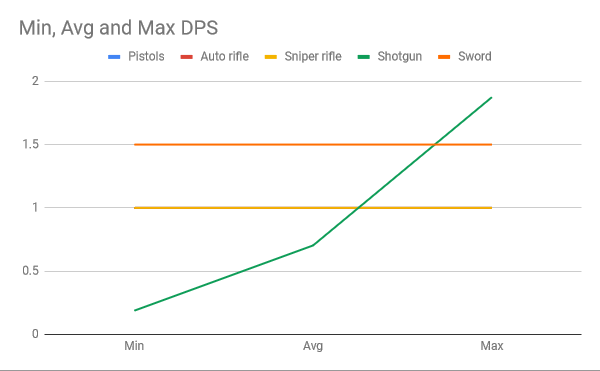 As we can see, the average DPS here is lower than any other weapon, but it quickly surpasses all other ranged weapons if played aggressively, and can even surpass the sword's DPS if it's fired point-blank on a sustained fire.

Enter, the melee weapon. This weapon rewards aggressive gameplay, while maintaining a higher reward in most situations.

Basically, it works like this: striking an enemy will incur a slight knockback, while allowing for chaining the attacks with combos. Against a single enemy, this is a very powerful weapon, but it quickly becomes overwhelming if the player is surrounded. However, since it's a fast weapon, an experienced player would still be able to mix dodges and combos to maximize the sword's potential.

Additionally, striking a projectile with the sword deflects it. All in all, it's a versatile weapon, but with a very limited range.

Despite all these words, this is still an estimation. I hope to have covered everything right the first time, but of course, only playtesting will truly give me the best results. Until then, this is the base balancing that I've chosen for Cosmic Void. We'll see how well it works!

A modern metroidvania about a mercenary android’s misadventure.